The Philatelic Society of Western Australia (Inc.) (‘PSWA’) encourages philately in all of its forms.
The Daytime Stamp Club caters for those unable to attend the evening meetings.

PSWA holds its general meetings on the third Tuesday of each month.
Meetings commence at 7.30 pm, with circuit sheets available from 7.00 pm.
An auction is held at each meeting.

After hours parking for Philatelic House is indicated on the following map: 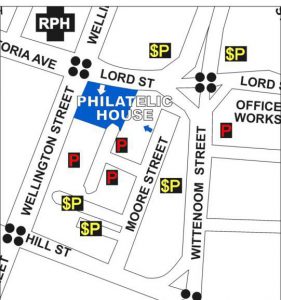 The Daytime Stamp Club meets on the first Thursday of each month, except January.
Meetings commence at 1.00 pm.

The Philatelic Forum meets at Philatelic House on the first Monday of each month, except January.
Meetings commence at 7.30 pm.

The Philatelic Forum promotes philatelic exhibiting.
Each meeting will include a Displaying Tips segment.

The Postmark Circle is in recess until further notice.

The Postmark Circle meets at Philatelic House on the second Monday of each month, except January.
Meetings commence at 7.30 pm.

Members are encouraged to participate by bringing any relevant material to complement the monthly topic.

No postmark can ever be deemed too humble!

Please note that the Airmail Circle was discontinued in late 2018.  Former members have joined the Postmark Circle.

Don O’Loughlin Trophy
This trophy is awarded to the best display by a junior (youth) member at the annual Stamp Mart.

Les King Trophy
This trophy is awarded to the best display by an adult member at the annual Stamp Mart.